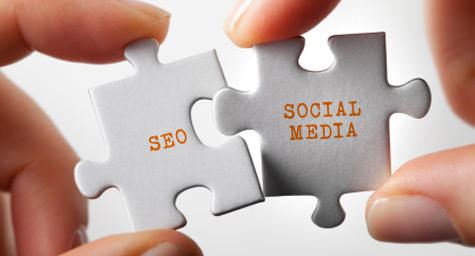 In this post from our Fast Track SEO Course series we are going to look at the influence of social signals on your Google ranking.

If you wouldn’t mind placing this hard hat on and donning this full body armour.

You are entering a combat arena.

The relationship between social shares and signals and SEO is hotly contested.

And sometimes it can feel like a bit of a war zone.

Over there Major Neil Patel sticks his head above the parapet and declares that “social is the new SEO”.

The troops over in Google HQ launch a counter-strike with Brigadier Matt Cutts solemnly insisting that, despite rumours (and contradictory previous statements) to the contrary, social signals are not a ranking factor.

Meanwhile the U.N. peacekeeping forces over at Moz wander through the carnage and, white flag held aloft, repeat in measured terms the following mantra:

“The number of social shares a page accumulates tends to show a positive correlation with rankings.

Although there is strong reason to believe Google doesn’t use social share counts directly in its algorithm, there are many secondary SEO benefits to be gained through successful social sharing.”

Let’s leave them to fight it out.

Here’s what we know social offers that can make a massive difference to your site’s rankings – even if it is at one remove.

It offers a great way to develop new relationships with your customers and your influencers.

It gives your content more wings than the reddest bovine of an energy drink.

And traffic that tends to be already ‘on board’.

Stay ‘on trend’ without coming off at an ever-changing culture’s U-turns and bends.

And being seen by Google as an expert in your field is crucial, as we’ve seen before.

And, a mention is just a step away from a link.

Correlations between social media and SEO

Let’s take a look at those correlations between social and SEO.

Here is what the great and good of the last Moz SEO Ranking Factor Survey think: 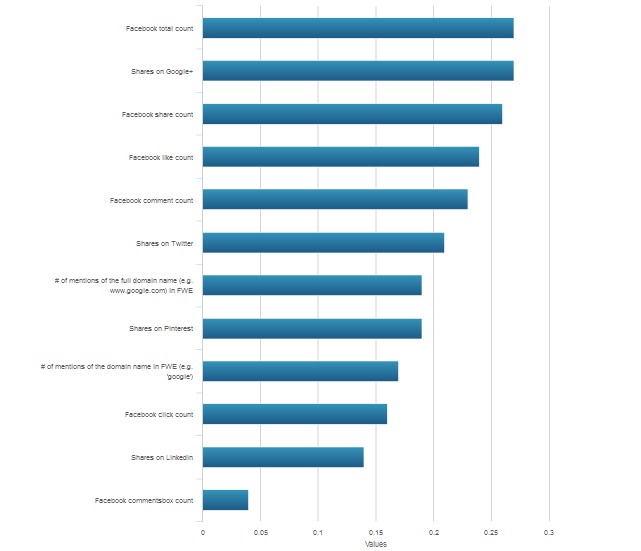 Running from the factors perceived to be the most important to the least, these are:

Don’t sweat the detail here too much for now. What we’re trying to highlight is the strength of these correlations.

Let’s put a couple of these into context by comparing them to other factors we’d expect to be dead cert correlations:

Shares on Facebook (correlation 0.26) vs Moz’s measure of Domain Authority (0.26)

Which is not to say social ‘causes’ you to have a strong position on a SERP. Simply that the sites killing it on social are also dominating the SERPs.

Google has certainly been economical with the truth in the past (or, at least, has delighted in a smoke and mirrors approach to clearing up uncertainty). Let’s accept that social signals aren’t directly used as ranking factors for now, though.

With correlations this strong you’d be crazy not to establish a strong social presence.

And, as Neil Patel stridently affirmed, the future does look like it belongs to social.

Social media is all about the ‘user’ taking control of their own web. And we know who loves this kind of thing, don’t we?

All the previous posts in this series can be found here.

For the complete version of this Fast track SEO course head over to Amazon.

It’s yours for less than a fiver!